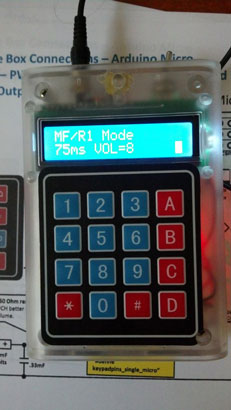 Remind Me Again What a Blue Box Is?

A blue box generates the tones that controlled the old long-distance telephone network. Typically blue boxes are handheld electronic devices with buttons or a dialpad like a Touch-Tone phone, but they can also be implemented in software on a computer. Blue boxes typically have an external speaker that emits the tones, and it gets held up to the moutpiece of a telephone to make a call with the blue box. See the Wikipedia article for more details.

If you're going to play with Project MF, you'll need a blue box.

One option is to download a software blue box for Windows. (You will also have to install Microsoft's.net framework.) This program will let you generate blue box tones through your PC's sound card and speakers.

But we think a far cooler option is to build your own. It's a pretty simple project, especially if you know anything about electronics. We already have a design for a simple yet capable blue box called the Project MF Blue Box.

This is an Arduino-based "Blue Box". It produces the "traditional" Blue Box 2600Hz tone and MF (multi-frequency) tones, but does much more! It also produces 12 tone signalling systems used by phone phreaks to hack other more exotic system in the US and overseas, including early pre-cellular mobile telephone systems from the 50s, 60s, and 70s.

The box has 12 non-volatile tone sequence storage memories that can store and play back up to 32 tones each. Each memory saves the tone mode as well. All operating parameters, such as tone duration, volume level, backlight status, reminder beep status, and current tone mode are saved to non-volatile EEPROM memory automatically and are restored when the box is powered up. EEPROM errors are automatically detected and corrected when the box is powered on.

An optional LCD provides full information of the operating status of the box and enhances the appearance and user-friendliness of the unit.

I designed this new blue box, as I was out of the PCB boards for my older PIC-based blue box design and was looking for a way for others to easily construct a blue box for use with the ProjectMF system, using inexpensive and commonly available parts. This design is easily the most full-featured and technically sophisticated blue box design available. I am a telecommunications and software engineer and took great pains to be sure all of the tone modes are accurately represented. The code has been thoroughly debugged and well-tested.

The following modes are supported. Note that ALL of these modes are obsolete (well, not DTMF!) and no longer work on "real" public telephone systems, except for private systems (like ProjectMF) set up for historical purposes. They are included to preserve the sounds of these old tone signalling systems: 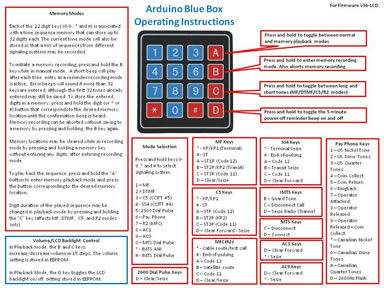 
The design goals were that it be small, low-power, easy to assemble, have minimum parts count, and not use any esoteric or hard-to-find parts,

We suggest you download a complete copy of the most up-to-date code, assembly instructions and schematics.

A writeup is also available on "Instructables" which you may find helpful.

The recommended speaker for use with the device is a 150 ohm earpiece from an old "500" type telephone handset. These are the standard handsets used by Western Electric, ITT and other phone manufacturers for decades. See the parts list for sources. Just unscrew the earpiece from an old phone, loosen the two screws, and remove the earpiece. BE SURE TO CLIP OUT THE VARISTOR (A SMALL COMPONENT SOLDERED BETWEEN THE SCREW CONTACTS) OR YOUR TONES WILL BE DISTORTED AND THE BOX WILL NOT WORK RELIABLY! 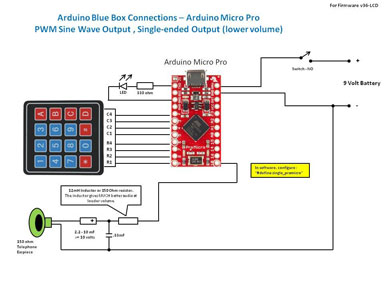 The box may work with other impedance speakers/earphone elements, with varying volume and hiss. Lower impedances will reduce the effectiveness of the PWM low-pass filter in the circuit, increasing hiss. Speakers vary widely in their efficiency (volume for a given power input), so you may need to experiment. The output power is low to keep the circuit simple.

The box may be connected to an external amplifier for volume control, or to a computer sound card input.

The Project MF Blue Box is a sophisticated little device! Here are some video tutorials from YouTube.